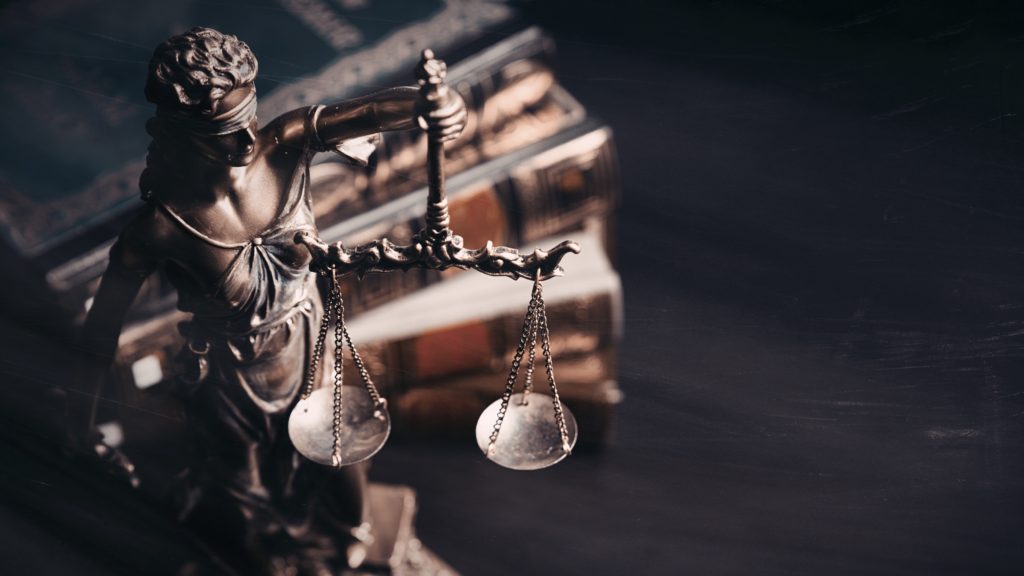 A little bit of judicial process to improve your business decisions

Even if I’ve never met you, I can still say this with a pretty high level of conviction: You’re not very good at making sound, evidence-based decisions. You think you are, but you’re not. Now, you shouldn’t get too worked up about this because neither am I, nor anyone you and I have ever come across. This is the first problem we must deal with, and we’ll come back to it in just a minute.

Not only are humans not very good at making sound decisions, but we’re also quite suspicious of others making decisions that affect us. As a result, it’s not enough for a decision to be sound, it must also be seen as being legitimate by the people that it affects. This is the second problem we will look into over the next few minutes.

Let’s go back then to the first problem at hand—the fact that we humans, taken individually, are not very good at making sound, rational decisions.

Evidence about this has been accumulating for decades. Mercier and Sperber put it this way: “Since the 1960s, much work in the psychology of reasoning has suggested that, in fact, humans reason rather poorly, failing at simple logical tasks, committing egregious mistakes in probabilistic reasoning, and being subject to sundry irrational biases in decision making.” (Mercier, H., & Sperber, D. (2011). Why do humans reason? Arguments for an argumentative theory. Behavioral and Brain Sciences, 34(2), 57-74, p. 58.)

About ten years ago, faced with the rising mountain of evidence, the two authors put forward a novel explanation: That the function of reasoning is not, as most people believe, to improve knowledge and make better decisions. Rather, its function is argumentative.

According to this view, individual humans are not skilled at making sound, fact-based decisions. What they are however is skilled arguers, “not after the truth but after arguments supporting their views.” (p. 57) Mercier and Sperber summarize things as follows:

“When one is alone or with people who hold similar views, one’s arguments will not be critically evaluated. This is when the confirmation bias is most likely to lead to poor outcomes. However, when reasoning is used in a more felicitous context—that is, in arguments among people who disagree but have a common interest in the truth—the confirmation bias contributes to an efficient form of division of cognitive labor. When a group has to solve a problem, it is much more efficient if each individual looks mostly for arguments supporting a given solution. They can then present these arguments to the group, to be tested by the other members. This method will work as long as people can be swayed by good arguments, and the results reviewed in section 2 show that this is generally the case.” (p. 65)

As someone who was trained in the law, this makes perfect sense to me. It is a basic tenet in most Western judicial systems that a vigorous adversarial debate will generally result in a better decision than an ex parte process. In fact, Mercier and Sperber themselves draw a direct analogy to the legal system: “Individuals thinking on their own without benefiting from the input of others can assess only their own hypotheses, but in doing so, they are both judge and party, or rather judge and advocate, and this is not an optimal stance for pursuing the truth.” (p. 72)

As I mentioned earlier, an adversarial process like the one that Mercier and Spencer describe will bear not only better decisions, but also more legitimate decisions. In an age of big data, algorithms and expert systems, this warrants a word or two. One of the first articles pertaining to the “conjunction of mathematics and the trial process” was published in 1971 by Harvard Law professor Laurence H. Tribe. In it, he addresses head-on the issue of legitimacy:

“It would be a terrible mistake to forget that a typical lawsuit, whether civil or criminal, is only in part an objective search for historical truth. It is also, and no less importantly, a ritual – a complex pattern of gestures comprising what Henry Hart and John McNaughton once called “society’s last line of defense in the indispensable effort to secure the peaceful settlement of social conflicts.” (Laurence H. Tribe, Trial by Mathematics: Precision and Ritual in the Legal Process, Harvard Law Review Vol. 84, No. 6 (Apr., 1971), pp. 1329-1393, p. 1376.)

Then as now, people who have a vested interest in a given outcome will be reluctant to trust an opaque process—let alone an actual black box. Perhaps people know intuitively that simply sorting mechanically through mountains of data will not, in itself, lead to a good decision (or one, at least, that factors in the human element). Perhaps they feel that there is something inherently dehumanizing in the act of delegating some types of decisions to algorithms. Or perhaps they just want to feel that they’ve been heard. Whatever the case may be, machines are not well suited to address such concerns.

If not the machines nor individual people, then what?

It just so happens that the judicial process (at least the one I’m most familiar with*), with its various features and safeguards, has quite literally evolved through trial and error, over hundreds of years, as a means to generate sound, rational and legitimate outcomes. It may not be perfect (nothing is), but it remains to this day the best process we have when the stakes are high and perhaps couldn’t get any higher.

1) That individual humans, on their own, are not very effective at producing rational decisions;

2) That humans in general tend to be suspicious of, if not hostile to, decisions made by others that have an impact on them;

3) That delegating many types of decisions to machines and algorithms is not a viable option at this time (and may never be) and;

4) That we have, in the judicial process and its various features and safeguards, a time-tested approach to generating (mostly) robust and legitimate decisions.

One concern that may jump out at you at this point is that the judicial process tends to be slow, cumbersome, overly formal and procedural (not to mention expensive!). That’s definitely not what I’m proposing here. What I am suggesting is that we borrow, by way of analogy as it were, some of the relevant features and principles of this system in order to support a more robust and legitimate decision-making process.

So what might a legal-analogous process look like when applied to, say, the strategic planning process? Here’s a bit of an overview:

2- Inform them that the objective of the process is to weigh various strategic options.

3- Explain that each (or some) of them will be asked to put forward their case in favor of whatever strategic option they personally advocate (cf. the efficient division of cognitive labor mentioned above)

5- Give all the parties enough time to put together a thoughtful case, gather their supporting evidence, etc. Make sure they also have access to the required resources (people, data, experts, etc.) to get the job done.

1- Bring together the relevant stakeholders. As a matter of procedural fairness, make sure that all the parties can make it.

2- Make sure that the rules of engagement (e.g. time allotted to each person) are clear and understood by all. Be ready to enforce them, also as a matter of procedural fairness.

3- Each party should be given an opportunity to outline their case and put forward the relevant supporting evidence. Make sure that enough time is allotted so that all parties feel like they’ve had a fair chance to be heard. Depending on what’s at stake, this exercise may involve multiple sessions over a number of days or weeks.

4- Give other parties the opportunity to ask questions, “cross-examine” the presenter, challenge the supporting evidence, etc. This step is absolutely key because this is how the group gets beyond individual biases and blind spots which we are trying to deal with in the first place.

5- Repeat steps 1 through 4 until all the parties have had an opportunity to vigorously put forward their respective cases (all with respect and decorum!).

1- Give whoever acts as decision-maker (whether a person or a group of people) an opportunity to step back, weigh the evidence properly, think through the pros and cons, etc.

2- As a matter of procedural fairness, make sure that only people who have heard all of the evidence (or were actually paying attention while the evidence was being presented!) are allowed to weigh in on the decision(s). Failing to do so will risk discrediting the entire process and compromising buy-in for the ultimate decision.

1- This is when it all comes together. Whoever is responsible for making the decision (person or group), must be able to clearly articulate their grounds or reasons. Failure to do so will give rise to concerns that the decision was arbitrary or worse.

2- For the decision to garner broad support, the decision-maker must be seen as being sufficiently endowed with the dual qualities of impartiality and independence. Be mindful of conflicts of interest, such as the ones created by financial incentives, internal politics, back-room deals, etc.

First, there’s no way of course you would ever want to put everyday business decisions through this kind of detailed process (although some aspects may still prove relevant). What I have outlined here can be a laborious, time-intensive exercise. But the higher the stakes (e.g. the very future of your business), the more you may want to invest in a robust decision-making process like the one above (if you have the luxury of time, which is not always the case). Applied judiciously towards the right kinds of ends, the principles outlined in this article may help you arrive at sounder, more legitimate decisions.

Second, the kind of “learning through analogies” which permeates my argument is meant to open up our minds by helping us to look at things from a different and intriguing angle. As Melanie Mitchell of The Santa Fe Institute wrote just a few months ago:

“These examples illustrate two important facts: (1) analogy-making is not a rare and exalted form of reasoning, but rather a constant, ubiquitous, and lifelong mode of thinking; (2) analogy is a key aspect not only of reasoning but also of flexible categorization, concept formation, abstraction, and counterfactual inference. In short, analogy is a central mechanism for unlocking meaning from perception.” (Melanie Mitchell, Abstraction and Analogy-Making in Artificial Intelligence, arXiv:2102.10717. To appear in Annals of the New York Academy of Sciences. page 3)

If nothing else, what precedes may have given you some valuable food for thought regarding the strengths and weaknesses of the decision-making process you currently favor. In the hope that is has, I rest my case.