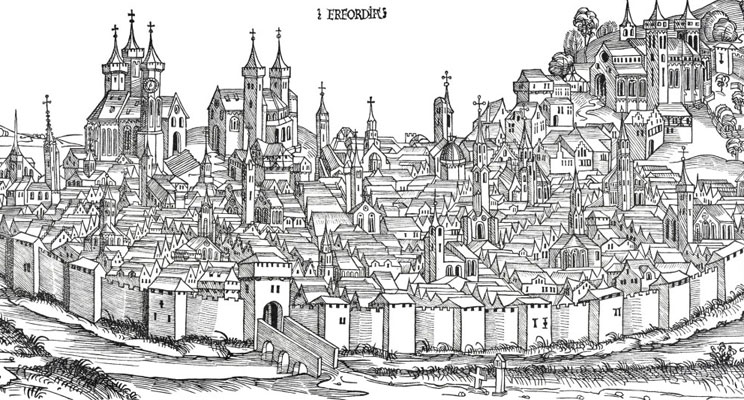 A turning point for corporations?

Social distancing measures have been in full effect for weeks and legions of people have retreated – more or less happily – to the relative safety of their homes. Workplaces and public spaces that used to teem with people lie eerily empty and many employees – fortunate ones for whom telecommuting proved possible – have carried on with their professional lives in a strange virtual world where newly disembodied organizations large and small continue to operate.

With whole sectors of the economy coming to a screeching halt and entire segments of the workforce suddenly cast adrift, many of the lucky individuals who have been able to find refuge and sanctuary have done so behind the virtual walls and moats of sturdy corporations. The conditions within the walls may not always be great but right now, it sure beats being stuck on the outside.

In Neal Stephenson’s classic dystopian novel Snow Crash, the United States have splintered into a patchwork of independent corporate entities under the skeletal remnants of a federal government that has given up control over the national territory. Well-to-do people live in walled suburban enclaves, while the majority of the population squats in piled-up storage containers. Mercenary security organizations patrol privatized highways and private organizations like Mr. Lee’s Greater Hong Kong or CosaNostra Pizza, which have secured full territorial sovereignty across their sprawling franchise networks, battle it out against privately owned churches and supra-national conglomerates. Alone to be guided by a code rather than policies and procedures, the Cosa Nostra – the Mafia! – stands for everything that is good and right and honorable in the world.

Great dystopia is always jarring because the mix of strangeness and familiarity is such that you can actually imagine yourself in the alternate reality offered by the author. In the case of Snow Crash, the extreme form of corporatism that came to supersede the modern state is quite reminiscent of what eventually came out of the ashes of the Western Roman Empire—what Frederic Maitland has referred to as “The federalistic nature of medieval society”. [1] Jacob T. Levy, professor of Political Theory at McGill University, has described this in the following terms:

“The 150-200 years after about 1050 CE saw a tremendous proliferation of formal organizations that were self-created, self-governing, or (often) both. Indeed, many of these are institutionally continuous today: European universities and cities, the Roman Catholic Church in its familiar form, and subordinate associations and orders within the Church itself. Others have not survived but spread widely during this era: independent military orders, guilds of various sorts.” (Rationalism, Pluralism, and Freedom, p. 89)

In the West, the emergence of strong, centralized states – modern states like the ones currently dispensing massive amounts of fiscal stimulus – started in France under the reign of Louis XIV and culminated in the complete dismantling of corporatism during the French Revolution. But of course, corporatism never went away completely and in the first half of the twentieth century, providing a counterweight to giant industrial corporations and making sure that they would act for the benefit of society was a central policy objective of successive US governments.

Large industrial corporations, over that period, came to be seen as full-fledged social actors rather than strictly economic ones. As Columbia University’s Nicholas Lemann writes in Transaction Man:

“The United States had declined to create the kind of comprehensive welfare state most European countries had. This meant that the corporation, when it could be successfully pushed into behaving like a social institution, was the American welfare state, at least for its millions of employees, their families, and to some extent the much wider circle of its small-scale suppliers, service providers, and retail outlets for its products.” (Transaction Man, p. 67)

Distrust, if not outright hostility towards intermediate groups is an age-old theme and the large business corporation is the emblematic intermediate body of our age. Whether intermediate bodies are a source of freedom and wellbeing or a source of misery and oppression is a debate that goes back hundreds of years. It pits thinkers such as Montesquieu, Tocqueville and Maitland on one side (intermediate groups provide checks against absolutism), and others such as Mill, Hobbes and Bentham on the other (centralized power as a remedy to corporatist oppression). Levy summarizes in three thoughts what he refers to as the Ancient-constitutionalist argument in favor of intermediate bodies:

“that the corps should retain the right or privilege of governing themselves, according to traditional laws; that the corps should have a say in the government, so as to be able to protect their liberties; and that the corps were natural friends of legality and liberty, because their protection of their own rights was so tied up with the refusal of absolutist pretensions.” (Rationalism, Pluralism, and Freedom, p. 120)

Other people, in agreement with Mill and Hobbes before them, have a much less flattering view of intermediate institutions, one which is rooted in the potentially oppressive nature of such organizations. Elizabeth Anderson of the University of Michigan, describing the modern for-profit corporation, offers a stark modern take on this age-old view:

“Imagine a government that assigns almost everyone a superior whom they must obey. Although superiors give most inferiors a routine to follow, there is no rule of law. Orders may be arbitrary and can change at any time, without prior notice or opportunity to appeal. […] The economic system of the society run by this government is communist. The government owns all of the nonlabor means of production in the society it governs. It organizes production by means of central planning. The form of the government is a dictatorship.” (Private Government, pp. 37-38)

Times of crisis have a way of bringing out the best and the worst in people and institutions. Some rise to the challenge and some sink to new lows. I personally find it remarkable how organizations of all kinds have stepped up to provide structure, purpose, community and yes, continued livelihood to their employees since the beginning of this difficult crisis. At a time when people are bombarded with a confusing amount of guidance and information – some of it sound but much of it not – organizations have played a critical intermediate role in distilling and relaying key messages from governments, experts and public health authorities directly to their employees. Corporations have been providing support on other fronts too: mental health resources, hardship support, and more. Businesses are also being enrolled as key vectors for the distribution of governmental support to citizens, while banks do the same through the mechanism of credit.

While checks and balances and countervailing influences will always be necessary, my own beliefs lean in the direction of virtuous, benevolent organizations. I am hopeful that the current crisis will offer an opportunity to business corporations – and large corporations in particular – to demonstrate their true commitment to society.