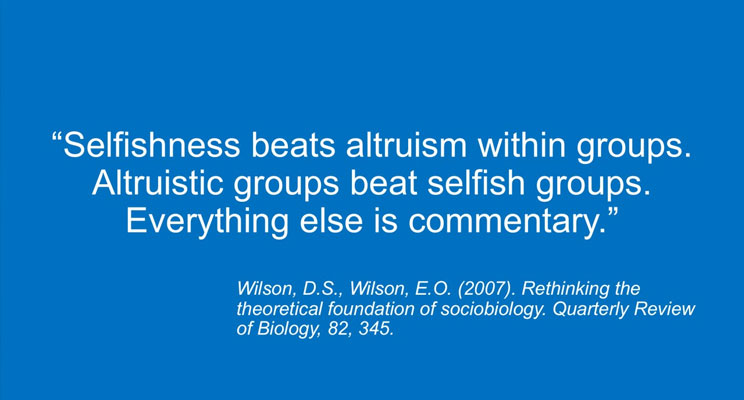 A case for altruism in organizations

Given that I’ve been working in business corporations for the better part of my adult life, it’s not surprising perhaps that I have developed, over the years, an interest in the corporation as a form of human association.

There have been many explanations – or theories – of the corporation but the one that currently holds sway in much of the Anglo-Saxon world (in spirit, even when not in law) originated with what has become known as the Chicago school of law and economics.

Simplifying greatly, the Chicago school holds the business corporation to be a “nexus of contracts” – a private market within the broader market in which relationships are organized through free consent within a framework of single-minded profit maximization by all involved parties. In “The Form of the Firm”, Abraham A. Singer summarized the view in the following terms:

“…the Chicago school developed a fairly ingenious account of the corporation as a nexus of contracts. In this view, the corporation was not a structure in which some were empowered unequally vis-à-vis others. Instead, it was a spontaneous arrangement that freely contracting parties create, implying interpretations of corporate law that are permissive with regards to corporate contractual arrangements, a denial of––and therefore a principled non-stance regarding claims about––intracorporate authority, and a minimal conception of business ethics, which denies the notion of corporate social responsibility and focuses solely on profit maximization.” (Singer, p. 111)

In a system erected on the pursuit of individual advantage, there is no room for altruism nor any reciprocal obligations beyond the postulated, freely entered into exchange: when all actors in the market behave to maximize their own self-interest, optimal results are produced that maximize collective welfare through the most efficient allocation of resources. As a mechanism that allows individuals to express their preferences, the market also supports individual liberty through the on-going exercise of free choice.

A competing view holds that the corporation exist for the very purpose of addressing failures or inefficiencies in the broader market and does this by suppressing the price mechanism within the firm in favor of a combination of central planning and various collaborative scripts (a moral/ethical framework) designed to bring about outcomes that could not be achieved in the open market. So, we have, on one hand, a theory of the corporation that posits optimal group/firm fitness through the selfish maximizing of individual preferences within the firm itself and, on the other hand, a theory of the corporation that posits optimal outcomes for the firm through deliberate and concerted internal collaboration (with everything that fostering said collaboration entails).

Which is most likely? While the Chicago school has little time for anything beyond the most basic of assumptions about human nature, there is much to be said, I believe, for looking for insights beyond the field of economics.

“When Hamilton reformulated his theory in terms of the Price equation, he realized that altruistic traits are selectively disadvantageous within kin-groups and evolve only because kin-groups with more altruists differentially contribute to the total gene pool. […]

All of the models obey the following simple rule, regardless of the value of N, the duration of the groups, or other aspects of the population structure: Selfishness beats altruism within single groups. Altruistic groups beat selfish groups.” The Quarterly Review of Biology, Vol. 82, No. 4 (December 2007), p. 335.

Wilson further explained this in an interview that was published in Quanta Magazine in May of 2019:

“The Hamilton theory implies that a mechanism was going on when relatives got together and that they were more likely to form a group because of their shared genes. However, this explanation is filled with mathematical errors and difficulties. Some of our evolutionary success occurred because groups formed and they tended to be altruistic. Genetic relationship or not, these groups often cooperated, which is part of why we homo sapiens were successful.”

Do I look out for myself alone, or do we look out for each other and for the broader group? I’m not a scientist but it seems to me from personal experience that trust would tend to be low in a selfish population and I would be hard-pressed to come up with any real-life examples of teams or groups endowed with low internal trust being highly effective at anything—especially when the going gets tough. Intuitively, the altruistic hypothesis just makes more sense to me (especially in conjunction with the well-known mobilizing power of shared purpose).

As we saw earlier, the logic of the market as contemplated by the Chicago school explicitly rejects altruism and moral/ethical scripts in favor of profit maximization and contends that the pursuit of self-interest by corporations (within the broader market) and individuals (within corporations as markets) is the optimal path to greater collective welfare. This flies in the face of sociobiology and evolutionary theory, which hold that human group fitness is optimized along lines of altruistic collaboration rather than the pursuit of selfish interests.

Society as we know it is a vast tapestry of overlapping organizations – some private, some public – that serve to structure human activities and human relationships into an edifice of intricate complexity. In-between individuals and family units at the bottom and sovereign states at the top, lies a layer of meso-level institutions such as universities, churches, political parties, associations and many others without which society simply couldn’t take on the complexity that most of us take for granted. This requires many ingredients but it is held up and made possible, at a sociobiological level, by our natural inclination towards altruistic cooperation. Are we to believe, as the Chicago school would have us, that alone amongst the various forms of human associations, the business corporation can ignore the optimizing benefits of altruistic cooperation?

I have experienced over the years various types of human organizations ranging from the business corporation to various types of non-profits, martial arts schools and the military so my view of things is not just a theoretical one. Altruistic groups do outperform selfish groups and I’ll put my dollar on caring, altruistic organizations prevailing over selfish ones in the long run on any day of the week. It feels empirically like the most rational choice to make and the selfish variety, in any event, is just not my cup of tea.